The Republican Party will invite former President Donald Trump to address its Spring meeting, which also serves as a gathering for high-dollar donors and potential 2024 presidential candidates.

The meeting, hosted by the Republican National Committee, will be held in Palm Beach, Fla., April 9-11, Politico reported.

Trump is camped out at his Mar-a-Lago residency as he plots his post-presidency moves and prepares his defense in his upcoming impeachment trial.

He has yet to make a public appearance since he left the White House on January 20th but he has made trips from his Palm Beach club to his Trump International Golf Club in West Palm Beach.

Trump also is mulling another presidential bid himself although that could be determined by his impeachment trial. If convicted, he could be barred from ever holding federal office again.

He’s also weighing whether to launch a third political party, the Patriot Party, which could fracture Republicans permanently. 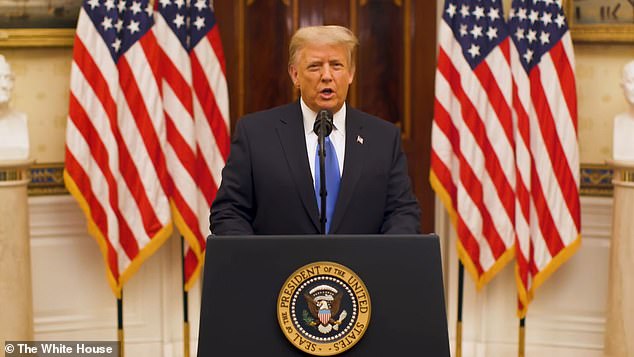 But if he does try for the Oval Office again, the party will stay neutral, RNC Chairwoman Ronna McDaniel said.

‘The party has to stay neutral. I’m not telling anybody to run or not to run in 2024,’ McDaniel told The Associated Press when asked whether she wanted to see Trump run again in the next presidential election. ‘That’s going to be up to those candidates going forward. What I really do want to see him do, though, is help us win back majorities in 2022.’

And she told The Washington Post Trump’s role ‘is going to be up to him in a lot of ways.’

‘I’m not looking at who we can highlight or prioritize. It’s about where we can take our party and our message going forward,’ she noted.

Republicans remained divided over the former president and whether he is or should be the leader of their party. The upcoming Senate trial has not eased tensions.

Trump’s loyal base of supporters stands by him though and could be a powerful force in future GOP primaries. But some Republicans acknowledge that Trump’s controversial behavior has alienated some voting blocs the GOP needs to win future elections.

Trump, himself, is working to cement his power as leader of the Republicans.

He met Republican House Minority Leader Kevin McCarthy at Mar-a-Lago Thursday – then released a statement boasting about his own power and influence in the party.

The former president was seen officially for the first time in a photograph released by his political action committee, having been banned from social media.

A readout of the meeting from Save America PAC said: ‘President Trump’s popularity has never been stronger than it is today, and his endorsement means more than perhaps any endorsement at any time.’

The statement makes it clear Trump sees his future role in the GOP as party kingmaker.

It is also a veiled threat to any Republican who has voted to impeach him, or any senator who may vote to convict, that he will use his power in revenge. 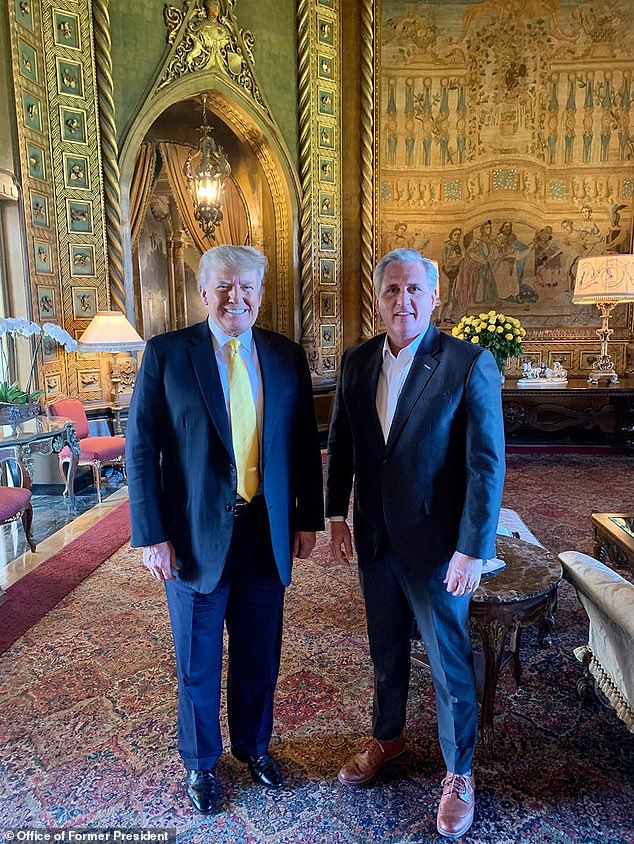 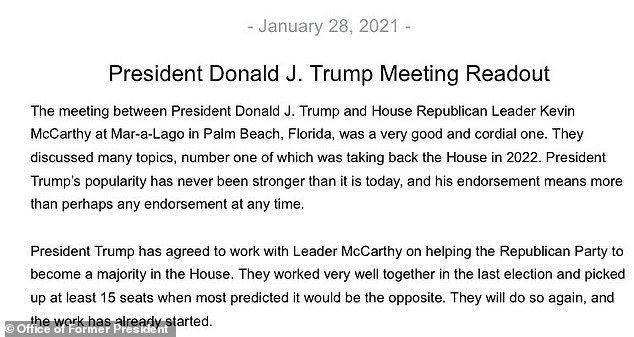 A readout of the meeting insists: ‘President Trump’s popularity has never been stronger than it is today, and his endorsement means more than perhaps any endorsement at any time’

VIDEO: Pro-Trump rally speaker says that ‘angel of death’ is coming for Lindsey Graham and Democrats before end of the year

History will look fondly upon the Anon. Babylon is falling.

JOIN US ON TELEGRAM

Uncounted Vaccine Deaths on Our Highways and Railways

Aides Urge DeSantis to Clobber Trump over “Dinner for Schmucks”

Another Vaxxed Pilot Crashes and Burns

This will close in 50 seconds